Flash Mob is opening today at The Peacock Theatre and will be running until 4th November 2012. I  was performing in Flash Mob when we originally created it for the Edinburgh Festival 2012. For the London version I was only a tiny bit involved in the choreography but it was great to somehow be a little bit involved again nevertheless. Hope you are coming to watch this dance extravaganza!

If I guaranteed to save you money, would you click this? ==> www.SavvySavings.Org.uk

Pre-Review…Dance shows have never really featured as much at the fringe over its million years unlike it does now. With a variety of hugely popular dance shows on TV the public demand for more dance shows has meant they now have the chance to not only get created but to tour and feature at the worlds biggest fringe festival.

This year “Flash Mob” is on a path to becoming the most talked about dance show of the fringe 2012. Filled with performers from all spheres of the dancing work “Flash Mob” has been causing stirs and now there is an opportunity to see why.

Though this was only day 2 of their shows at Assembly Festival main hall the early technical problems could have been more problematic than they where. It did get a little uncomfortable to see the dancers have to restart but it didn’t seem to faze the audience and they quickly managed to get it fixed though throughout the show there would still be a few glitches which I only mention do to the emotional beauty that these dancers showcased last night.

The ability, skill, and wonderment that each of the different dancers brought to the show was remarkable but I only had two issues. The first was a lack of story – the dancers are at the very top of their game and produce such a mesmerising spectacle on stage their different ability and skills could have been woven into a different narrative. The second issue was that the female dancers where not given their own section like the male dancers had been. As performers each of the women dancer showcased, grace, strength, and beauty in such a remarkable way and should have been able to move away from the male dancers and given their moment to shine.

When the Olivier Award nominate Tommy Franzen came on stage to perform a tough and physically brutal and honest contemporary piece the show change. In a stunning display of skill and ability Franzen showed just why he is an Olivier Award nominated performer. It was a heartbreaking piece to watch as Franzen moved in perfect balance with the music, his body wrapping around every note heard creating something truly breathtaking.

The whole piece was inspiring.

Link to the original article http://www.thenewcurrent.com/2012/08/04/edinburgh-fringe-festival-2012-review-flash-mob/

FOR every self-indulgent, esoteric, audience-alienating dance show ever performed, Flash Mob is the antidote.

Don’t be confused by the title – this is no shopping-centre gathering where those around you suddenly burst into synchronised movement. This is a dance mob that’s flash – although for “flash”, read talented, hard-working and completely dedicated to their craft.

For those who think commercial dance means leaving your artistry at the door, then the five acts brought together to create this Fringe highlight are ready to prove you wrong.

Most of them have come to the public eye via television, reaching the finals of one of the recent glut of dance programmes re-igniting the genre.

Tommy Franzén is probably the best known, having been runner-up in the 2010 series of So You Think You Can Dance? and, fittingly, the production opens with him in a spot-lit solo.

But this is no one-man show. Flash Mob is a celebration of dance and the many wonderful forms it comes in. Known mainly as a hip hop performer, Franzén also does a nice line in contemporary dance, with some reflective work peppered with breakdance moves. When it comes to contemporary, however, Alleviate are the stars of the show.

Nicolette Whitley and Renako McDonald were runners-up in 2011’s Got To Dance, and their two heart-felt duets, one of which uses the Eminem/Rihanna song Love The Way You Lie to great effect, are joy to watch.

Having only recently made the final in this year’s Got To Dance, A Team has yet to make a name for itself in the way Diversity and Flawless have, but this slick hip hop crew deserves to. Four men and one woman switch from one soundtrack to the next in the blink of an eye, throwing in some impressive back-flips to warm up the crowd.

A superb and utterly spellbinding Irish dance duo, Brosena (also from this year’s Got To Dance), and sensual Latin couple Mike Viry and Yunaisy Farray, complete the bill, widening out the dance genre further, with Viry in particular providing some jaw-dropping moves.

It’s this pick-and-mix quality that makes Flash Mob such a great ambassador for dance as a whole. The only problem with the show is it lasts just an hour. With such joyous talent and variety on offer, that could easily have been doubled without fear of boredom.

Link to the original article http://www.scotsman.com/the-scotsman/scotland/dance-review-flash-mob-assembly-hall-venue-35-edinburgh-1-2453185#.UB_vjhP9FSw.twitter

When the dancers of Flash Mob ask the audience to join in with a dancealong routine, they get a giggly, enthusiastic response. It’s a happy ending for a friendly show that brings together dancers from various reality TV dance series, in styles from hip hop to Irish dance.

The dancers create their own numbers, which makes for variable choreography but warm, committed performance. Some routines have the cheesy openness of a 1980s dance movie: there’s big emoting and swoopy moves from contemporary duo Alleviate. Irish dance duo Brosena have a very Eurovision soundtrack, but match it with sparkling footwork. Mike Viry and Yunaisy Farray, who appeared in the movie Streetdance 2 3D, ripple and undulate through Latin numbers, hips and shoulders boggling.

The stellar performance comes from Tommy Franzén, recently nominated for an Olivier award. He shows both his street and contemporary dance sides, from weighted, curling moves to a sugar rush of a routine to the Jackson 5. He leads a cheerful rehearsal number with the other men, trying out styles and pretending to pinch each other’s showiest moves.

Link to the original article http://www.independent.co.uk/arts-entertainment/theatre-dance/reviews/flash-mob-assembly-hall-edinburgh-8052984.html

Bouncy and aspirational … Flash Mob’s performers have been culled from TV reality shows. Photograph: Murdo Macleod for the Guardian

Britain has apparently become a nation of dancers, or at least a nation addicted to TV dance shows. The finale of this short, entertaining production sees the entire audience getting to their feet in response to instructions from the stage, uniting in a mass hand-jiving, hips-sashaying dance.

The selling point of Flash Mob is that its performers have been culled from TV shows, with headliner Tommy Franzen, a finalist from BBC1’s So You Think You Can Dance. What makes Franzen a star, however, has little to do with his screen celebrity: it’s the skill and musicality of his dancing.

His style is a mix of choppy footwork, one-arm balances and slippery dives, all delivered with a manner that’s part hip-hop homeboy, part music hall comic. On top of this, Franzen can layer elements of contemporary dance, jive and ballet, and phrase it all with such rhythmic acuteness that every move has a three-dimensional expressiveness.

Franzen alone is worth the price of a ticket – but unfortunately everyone else on stage ranks in very sharply descending order of appeal. My favourites are Irish dance duo Brosena, particularly their belter of an opener, which features a hip-hop version of Beethoven’s Fifth driving their feet to an intensity of swivelling, criss-crossing speeds.

A-Team deliver some tight and tough street routines, fronted by tiny schoolgirl Suki, whose speciality is balancing on one leg and jabbing the other high in the air, an angelic kung fu master in trainers.

Mike Viry and Yunaisy Farray look out of place, however, their strenuous sultriness imported from late-night Cuban cabaret; while contemporary dance couple Alleviate need to find better choreography than their literal-minded duets of sex and heartbreak.

Still, the bouncy, aspirational style of the show is hard to resist. The evening I saw it, one small child refused to leave her spot as the theatre emptied, still rapturously going through the closing flashmob dance.

Link to the original article http://www.guardian.co.uk/culture/2012/aug/17/flash-mob-review?newsfeed=true

August 19, 2012 | Categories: Uncategorized | Tags: a team, alleviate, brosena, flash mob, franzen, gary lloyd, got to dance, review, so you think you can dance, the guardian, the independent, the scotsman, Tommy, tommy franzen | Leave a comment

“Flash Mob” now of sale for our Edinburgh Festival 2012 run

Full line up for Edinburgh is Olivier award nominee and So You Think You Can Dance runner up Tommy Franzén, Got To Dance runners up Alleviate, The A-Team also from Got To Dance, Mark Swarf Calape winner of Move Like Michael Jackson, Brosena from Got To Dance and Mike Viry and Yunaisy Farray, Latin dancers from StreetDance 2 3D the movie. Where dance worlds collide, this will be an explosive show directed by the award winning Gary Lloyd (Thriller Live, Hair etc). Get tickets now http://www.assemblyfestival.com/event.php?id=182

On the 3rd of August we open the show “Flash Mob” at Edinburgh festival 2012. Apart from myself the show will include A-Team Corporation, Alleviate, Brosna and a latin couple from the movie Streetdance 2 3D. The tickets will go on sale 10th May. Gary Lloyd will be directing the show. I will keep you posted! 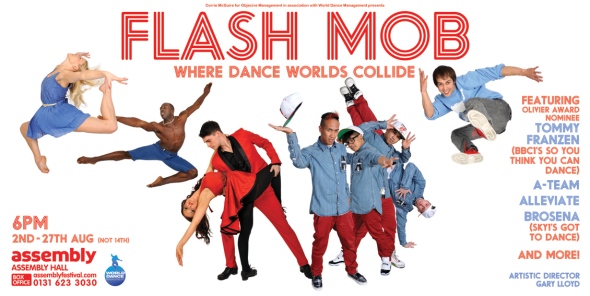