The Streetdance Spy’s interview with me about dance.

Tommy Franzen ‘Blaze’ choreographer: “I want to produce my own show.”

Twenty-eight year old B-boy and commercial dancer Tommy Franzén started out copying dance moves from sister when he was little back in Sweden. He took up a few classes and he’s never looked back.

Since those toe tapping days Tommy has gone on to star in musicals, appear in films, adverts, and dance talent shows like ‘So You Think You Can Dance’ (SYTYCD) U.K. If you’re still trying to place where you may have seen Tommy – think back to the ‘Pepsi Can-Fu’ advert.

The ‘Urdang’ Academy graduate has achieved so much already, and is in talks to create his own dance show featuring ‘dancing and choreography’. He seems so passionate about this idea, he beams; “I really want my own project that I can put all my experience and heart in to.”  I ask if he is worried that as a result of all the success and coverage of street dance in recent years, whether audiences will get bored of it. Tommy explains “Yeah it’s possible but that’s the risk with everything, choreographers could take things so far that there’s no room to improve, but I think that’ll take at least a couple of years.”

The life of a dancer is certainly not all glitz and glam, Tommy recounts jobs where he has had little or no time to prepare and warm up “you’re just on and you go ahead and do it and you don’t have much time to take care of yourself.” While Tommy was in the bubble of SYTYCD he claims he had to ‘block out everyday life’ he said “you need to do that in order to do well, you can’t have your mind anywhere else but in that place.”

I imagine one of the hardest things about a dancers life is the constant physical pressure. Tommy explains there are other less obvious aspects where dance can test you; “it’s also the mental pressure that you go through, it’s the panic of whether your brain has got enough capacity to take in any more information.”It appears, not only do you have to be a positive healthy performer but you also need to be mentally strong. Tommy drives home the point “it’s such hard work to keep training all the time, you need to keep on top of it all the time even if you’re not working.”

No sooner had Tommy finished filming SYTYCD, then he was then snapped up by the smart people of Sadlers Wells to choreograph and perform in ‘Blaze’ the West End Street dance sensation. Used to dancing 10 hour days, the b-boying prince took it all in his stride. He explains that the unpredictability of dance is something he enjoys “you don’t know how much the next project is going to pay, but I kind of like that.

“The thought of not really knowing, I kind of buzz off that.”

When it comes to preparing for dance shows Tommy has rather unorthodox approach. Unlike most dancers he doesn’t hit the gym, oh no, Tommy prefers things a little more risqué, a spot of ‘cross training, rock climbing and sometimes gymnastics’ is more his thing. Despite Tommy’s penchant for dangerous pass times he makes sure he looks after himself and knows that dance injuries don’t just disappear, he laments; “injuries that you pick up are always with you.”

Franzén getting back to basics with rock climbing

I ask Tommy what he thinks of starting to dance at an early age, he agrees that training earlier means you’ll get more practise at the dance style, however ‘it could mean that you get bored of it earlier.’ You often hear people reminiscing about the past, sighing ‘I really wish I’d kept that up’. Tommy himself is one example of picking dance up at a young age and has years of experience.

One dance forum suggested that all dancers who want to go pro are expected to commit to about 15 hours a week of technique training i.e. ballet, and anything up to twice that during summer months. Tommy explains that taking up technical dance styles that are designed to ‘train your body to look unnatural’ at an early age can be ‘tough on the body in later years.’

The qualified massage therapist, yes you read correctly, feels most comfortable b-boying and conceptualising hip-hop choreography. We start discussing the topic of b-boying, or rather b-girling. He agrees that it is still very much a man’s game “I can’t really think of any female b-girl pioneers off-hand, it would be nice to see more women in that style” adding “you get a lot of b-girls that dance like men.

Most of the male pioneers of B-boying are old school battlers who stand for the East coast or the West coast of America. The U.S. soul and funk movement is where b-boying was given birth. From the hot stepping feet of James Brown, to battle-zone’s like ‘Harlem World’ of 116th street, Harlem. “I Love dancing to old funk tracks, and I look up to East coast and West coast greats like Mr. Wiggles and the guys from Rock Steady Crew.”

My interview with Digital Spy. Where am I now, a year on since SYTYCD?

How have the last 12 months been?
“It’s been brilliant and it’s still accelerating. It’s not stopped even 12 months on. I have moved slightly into choreography. I haven’t done that consciously because I want to dance for a bit longer. But I’ve had lots of requests and it’s just naturally moved that way without me trying. I can’t complain really.”

What projects are you working on right now?
“I’ve got three exciting projects at the moment. One is choreographing for Cher Lloyd, her first single and her promo tour, which is new to me. At the moment, I’ve got a show on at The Place, a show I’ve done with Supple, one of the choreographers for So You Think You Can Dance and creative director for Got To Dance . Then I’m also working on Some Like It Hip-Hop, where I’ll be choreographing and playing one of the leads. We’re doing a month of that at the Peacock Theatre.”

Is the Cher Lloyd work getting you lots of attention?
“The hype is so high about her. If you mention anything on Twitter all her fans start following me and start tweeting me, ‘say hello to Cher for me’. They are just so excited about what she’ll come out with, so I tease them a little bit with information and pieces like that.”

What do you make to her first single?
“I am actually. I think the song will do really well. Especially among teenagers. It’s really catchy. I think the video is going to be wicked too. From what I’ve seen on the shoot, I think it will be a good one. There is something special about her. She’s got that swagger and you can see that on X Factor when she’s performing. She moves really nicely too. She’s not a trained dancer or anything, but when she does, it’s really, really good.”

The So You Think You Can Dance final airs on Saturday at 7.15pm on BBC One.

SYTYCD Season 1’s… Where are we now?

Well this was recorded last November so it’s kind of a bit dated! They used some weird clips of me and Lizzie (well particularly me lol) which would rather qualify as outtakes. Haha! Never mind…. Enjoy!

Tommy Franzen and Mandy Montanez’s Broadway routine from week 4 of So You Think You Can Dance UK 2010. Video clip includes the VT and the judge’s comments. It’s so funny as I didn’t say ‘….we are an unfortunate couple…’  in that context. What I really said was ‘People might see us as an unfortunate couple but we feel very strong together’ or something like that. Lol!
I love Nigel Lythgoe’s comments at the end! His words makes me feel so honored.

Choreography: Stephen Mear
Music: There’s Got To Be Something Better Than This from Sweet Charity

Tommy Franzen and Yanet Fuentes Salsa routine from week 3 of So You Think You Can Dance UK 2010. Video clip includes the VT and the judge’s comments. I had never done salsa before and it was so difficult but I thoroughly enjoyed it. The Latin queen Yanet helped me a lot 🙂

Tommy and Charlie’s Pop Jazz routine from week 2 of So You Think You Can Dance 2010. Video clip includes the VT and the judge’s comments. Slightly cringe worthy VT for me with the drama going on between me and the choreographer but I’m sharing it anyway. The disagreement between Arlene and Sisco at the end is hilarious though.

Choreography: Frank Gatson
Music: “Everybody In Love” by JLS

Tommy Franzen and Charlie Bruce’s hip hop routine from week 1 of So You Think You Can Dance 2010. Video clip includes the VT and the judge’s comments as well.
Choreography: Simeon Qseya.
Music: “The Way I Are” by Timberland 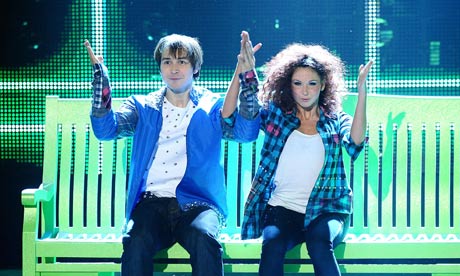 Simeon Qseya choreographed a hip hop routine for the choreography camp of So You Think You Can Dance 2011 and Tommy & Lizzie performed it for the contestants. Afterwards Simeon, Tommy and Lizzie taught the routine to the contestants but unfortunately the performance didn’t make the edit in episode 2. The video of Tommy & Lizzie rehearsing the routine is by no means polished as it was done in 2 hours but I thought it might be interesting to see the whole routine.

My solos from So You Think You Can Dance where taken off YouTube for some reason so I’m uploading them again and we’ll see if they stay on there. This one is from SYTYCD Series one, week 3. The song is Beggin’ by Madcon.